CHECK OUT OUR STORY.

We have stories other people want to hear. What you see below is just one of many.
Home / Newsroom / Cracks After an Earthquake; Should I Be Worried?

Cracks After an Earthquake; Should I Be Worried?

The ground starts moving; the house starts shaking; rumbles, cracks, and pops are heard throughout. This is a scene all too familiar to people who live in earthquake-prone regions. As the building stops moving you’ll probably walk around to assess any damage: knocked over books, shuffled cabinets, large cracks in the walls, dogs barking. Wait, what? Was that crack there before? Should I be worried?

Maybe, but if the building is still standing you’re off to a good start. Cracks and movement are to be expected even under moderate seismic events. Many factors will need to be considered to determine the ability of the structure to continue to provide safe shelter, however, a few quick checks can help put worried minds at ease. Let’s discuss a little bit about how buildings are intended to function during a seismic event so we can see why those cracks might show up.

Most structures transfer lateral loads, such as wind or seismic, to the foundation through shear walls, braces, or moment frames. The stiffness of the individual elements will control how much the structure moves under load. Flexible structures, such as moment frames that resist lateral forces through bending of the beams and columns, allow for large movements. Typical home construction utilizes shear walls which transfer loads primarily through shear in the plywood.

Interior wall finishes are typically more stiff and brittle than the structure itself. It is expected that these brittle finishes that have a very low tolerance for movement will crack as the larger and more flexible parts of the structure begin to move. 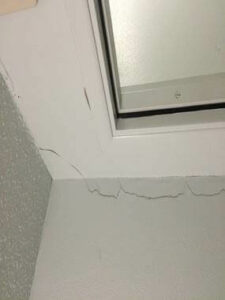 Shear walls can be very strong but unavoidable features will create weak points in the walls. Doors and windows perforate shear walls and create areas that are prone to additional flex and rotation where headers frame into full-height walls. It is common to find cracks that propagate from the corners of doors and windows since these areas act as hinges and rotate as the building moves back and forth. These cracks that run diagonally from perforations are generally of little concern to the integrity of the building.

Not all walls in a typical home are going to be designated as shear walls. Many interior walls are considered partition walls and are just along for the ride. It is common to find vertical cracks where partition walls intersect other walls or horizontal cracks where these walls intersect roof or floor structures above. These cracks form because the finish is unable to hold together the difference in movement between walls and does not indicate a failure.

Significant cracks in buildings will typically occur somewhere in the middle of the wall and run roughly horizontally. These cracks indicate that slippage or rupture of the plywood may have occurred which will reduce the capacity of the wall. Of course, any floors or roofs that begin to sag or become uneven could indicate a problem. Walls that become noticeably out of plumb, especially if they are exterior walls, may also indicate hidden damage. Any of the aforementioned conditions should be evaluated by a professional.

It is also worth noting that existing cracks may go unnoticed until after a seismic event when people are typically looking for damage. See if you can figure out if the crack has been there for a while. Maybe there is dust inside the crack or the colors have faded. One time I was sent to a job to evaluate some cracks that were reported to have been caused by a recent earthquake only to find them on a street view on Google from over 5 years ago!