Evaluating the feasibility of changing the extraction method from surface to underground mining at a limestone quarry.

Cemex operates a limestone quarry near Wampum, Pennsylvania, that supplies the feed to their nearby cement factory. The quarry had traditionally been mined using surface methods, but while extracting the Vanport Limestone, the mining ratio began to increase. Because the mining ratio can determine when the current mining method becomes uneconomical, and because the mining ratio was projected to be even higher for the next block of reserves, Cemex hired RESPEC to evaluate the feasibility of changing the extraction method to underground mining.

RESPEC conducted a feasibility analysis that defined the recoverable reserves using a drilling program. As part of the drilling program, RESPEC conducted a detailed sampling of the recovered limestone core using X-ray fluorescence (XRF) analysis to determine the rock quality. Additionally, RESPEC recovered samples of the limestone, roof strata, and the floor and completed a rock-mechanics analysis by using geotechnical testing to determine pillar sizing and room widths.

Based on RESPEC’s study, Cemex determined that underground mining was a technically feasible and financially viable alternative that offered significantly lower costs than the existing dragline operation. To assist Cemex in implementing this new, more cost-effective mining approach, RESPEC prepared detailed designs for the portal development and submitted a permit revision to the Pennsylvania Department of Environmental Protection to allow for underground mining of the quarry.

Cemex implemented the proposed mining plan and replaced the surface-mined source of limestone with stone from the underground mine. 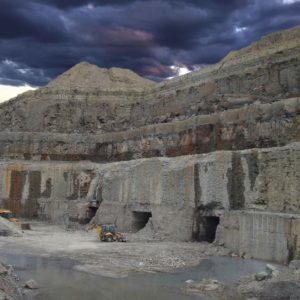