RESPEC recently completed an update to the Fairbanks North Star Borough’s (FNSB) GIS-based land suitability analysis with more current datasets. The intent of the analysis is not to identify where development should occur, but whether land may be suitable for development based on physical properties and the community’s values. The analysis serves as a tool to assist the FNSB staff during planning and development to prevent land-use conflicts and ensure that land is developed appropriately.

The land suitability tool was originally developed in 2013 using the best available data at the time. In the years since the tool was created, new, updated, and higher resolution datasets have become available. The first task in this project was to evaluate new datasets against the old data and determine which could be replaced and which were new.

The updated analysis utilized multiple datasets, such as soils, slope, aspect, wildfire potential, and flood zones, to identify areas around the borough that were more suitable for development. The original analysis method along with RESPEC developed weighted overlay analysis were compared. Our team worked closely with the FNSB to identify parameters for development and create the weighting scale for the analysis.

Field data collection was conducted to verify which analysis best supported by on the-ground conditions. We used ArcGIS to generate random locations throughout the study area that were then visited by local staff. At each site, we evaluated the criteria used in the tool—slope, aspect, elevation, etc.—to determine whether the land suitability tool’s results were accurate. Our field work concluded that the tool accurately reflected conditions on the ground.

RESPEC developed the methodology to implement a weighting overlay analysis to generate a comprehensive, borough-wide suitability map. Our team used ArcGIS Pro to conduct the analysis and delivered all results, maps, and datasets in an ArcGIS geodatabase format, as well as a map package to retain symbology. The FNSB primarily uses ArcMap, so our team created deliverables in both ArcGIS Pro and ArcMap-compatible formats.

The RESPEC team provided the FNSB with internal how-to documentation and training materials for the use of the updated tool. 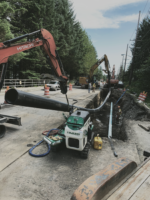