Addressing physical and environmental hazards associated with a decommissioned coal mine.

After over 100 years of coal production, the Savory Mountain Coal Mine (also known as the Thomas Mine) was closed in 2008 and portals were backfilled with available fill and coal slack. By 2011, the earthen closures had started to deteriorate and the two portals  were partially opened. Several dangerous and unstable embankments surround closed portals. Coal slack and gob piles were scattered throughout the property that impacted the irrigation channel at some locations. Industrial waste material was stored in old 50-gallon drums. In 2016, RESPEC was contracted with the Wyoming Department of Environmental Quality/Abandoned Mine Land to address physical and environmental hazards associated with the decommissioned mine.

To stabilize the steep slope above the portals, the temporary fill material that had been placed over the two portals was excavated, cleared, and grubbed of the existing earthen material and debris. The east portal measured 20 feet (ft) x 10 ft, and the west portal measured 12 ft x 8 ft. Back forms were constructed where needed. Two 6-ft Polyurethane Foam (PUF) plugs were poured and block-and-mortar walls were constructed. The coal slack and gob piles were mitigated and the industrial waste was removed .

The west portal was excavated, cleared, and grubbed of the existing earthen material to a depth of 7 ft.  At 7 ft, the adit remained closed with earthen material from the ground to within 1 ft of the roof, so construction of a back form was not necessary. The 1-ft air gap between the earthen closure and the roof of the portal was sealed with PUF before work began on the 6-ft plug. The 6-ft PUF plug was poured to fill the void from the earthen closure to the front of the portal opening.  A block-and-mortar wall was constructed at the front of the portal opening. One final PUF pour was placed after the block wall was constructed to ensure that no void remained behind the wall.

Both portals were then backfilled with fill material that was placed, spread, and leveled in 1-ft lifts. The remaining coal slack and gob pile material was hauled and placed over the backfill material.  The stockpiled coversoil  was then placed at a depth of 3 ft over the backfill and coal slack.  The area was blended to match the surrounding topography.  Disturbed areas were reseeded with mulch that was incorporated and crimped over the seed.  Erosion-control wattles were installed to aid with runoff, and the industrial waste from the site was removed and disposed of. 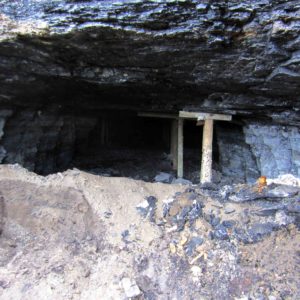 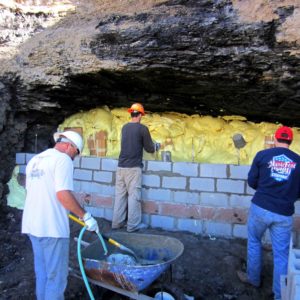 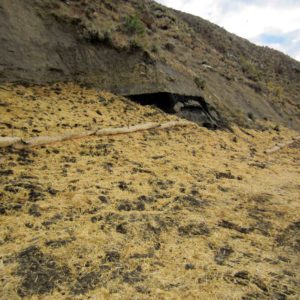