RESPEC is investigating impacts from a pipeline failure that discharged 500 barrels of oil-and-gas brine into a pristine grassland easement in northeastern Montana. The underground pipeline gathered brine waters from nearby producing wells. When released, the brine surfaced and impacted 9 acres of the easement and flowed into a tributary of Sand Creek (part of the Medicine Lake National Wildlife Refuge Watershed). RESPEC staff completed a preliminary assessment of the release to determine water quality degradation within Sand Creek drainage and to characterize the lateral and horizontal impacts within the grassland easement.

RESPEC staff employed surface geophysics and surface samples to delineate the lateral extent of the release. The vertical extent was defined by using a series of direct-push soil electrical conductivity probes to depths of 30 feet. Select probe holes were used to collect soil and groundwater samples for laboratory analysis of cations, anions, metals, and petroleum hydrocarbons. The probes and laboratory results showed minimal impacts to groundwater, and a comparative analysis of background and contaminated samples helped define brine-induced impacts from naturally occurring soil salinity.

RESPEC continues to work with the Montana Department of Environmental Quality, and the US Fish & Wildlife Service to develop a remediation plan to recover brine that was released to isolated wetlands, restore the impacted grassland easement, and prevent future releases to the Sand Creek drainage. 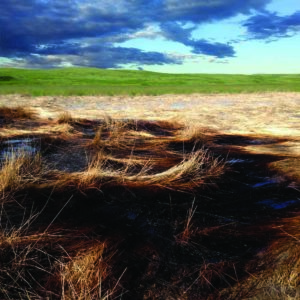