Synthesizing subsurface geology data to generate three-dimensional models to support the visualization of geology at underground mining operations, from the core hole to the regional scale.

Our clients have a wide variety of geologic data and rely on RESPEC to help them synthesize and visualize this data.

For an Ohio mine, we developed a site-wide, three-dimensional (3D) geology model that includes stratigraphy and structures. We reviewed core data from the mine and nearby oil-and-gas wells to map the geologic surfaces. RESPEC assisted in interpreting a new seismic reflection survey and incorporated data from that survey, including known and potential faults. Visualizing the geology and fault structures on this scale helps the mine engineers to communicate geologic information with regulators and the public.

At another site, RESPEC helped our client develop a simple, regional geology model by using stratigraphic interpretation from oil-and-gas geophysical logs. Recent coreholes were drilled to identify the continuity of the mining horizon and identify any potential structural features. RESPEC synthesized the core and geophysical wireline data, displayed that data in three dimensions, and interpreted the geology. RESPEC delivered rotatable 3D pdf files to provide the client with maximum viewing capacity of the data without the need for additional software. 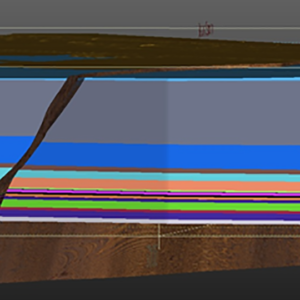