Assisting CRH in the due-diligence review of the limestone quarries associated with a cement factory.

RESPEC was retained by CRH, PLC to assist in the due-diligence review of the limestone quarries associated with a cement factory owned by My Home Industries. The cement factory was located in the Mellacheruvu Village in central Andhra Pradesh, India, and consisted of three cement production units. The limestone was mined from three separate quarries near the factory, all of which are part of the Cuddapah-Kurnool Basin.

The commercial Koilkuntla limestone resources are located in the northern portion of the basin (in the Kurnool and Palnad subbasins) where the northwest portion has a gently dipping contact with exposed granite basement rock. In addition, the Koilkuntla limestone resource consists of several different horizons underlain by shale and quartzite that inconsistently overlay the granites. The shale horizon is used as part of the raw mix.

The due diligence conducted by RESPEC included site visits to the quarries and reviewing the geologic exploration data, mining licenses, and historic production records for both tonnage and quality. After obtaining RESPEC’s due-diligence review, CRH announced in March 2008 that it signed an agreement to acquire a 50 percent shareholding in My Home Industries. 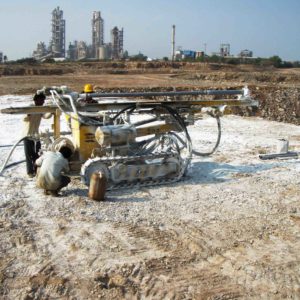