Two recent research projects that RESPEC has completed in support of the Waste Isolation Pilot Plant (WIPP) are the uniaxial unconfined compression and triaxial strength testing of WIPP salt; these programs were completed for Sandia National Laboratories. The first program involved uniaxial compression tests up to temperatures of 300 degrees Celsius (°C). At temperatures greater than approximately 280°C, the salt violently exploded before loading had begun. RESPEC has performed very high-temperature testing on other salts that did not decrepitate.

The second most-recent testing was a limited study that completed independent, adjunct laboratory testing in the US to assist in validating similar test results provided by German facilities. The testing protocol consisted of completing confined, triaxial, and constant strain-rate strength tests of intact WIPP salt at temperatures of 25° and 100°C and multiple confining pressures. Ultrasonic velocities were also measured during the test to help indicate salt dilation.

When combined, the total database of laboratory results will be used to develop input parameters for models, assess the adequacy of existing models, and predict material behavior. These laboratory studies are also consistent with the goals of the international salt repository research program. A rigorous quality assurance protocol was applied so that corroboration will potentially qualify all of the test data gathered by German research groups. 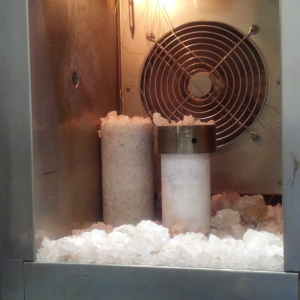 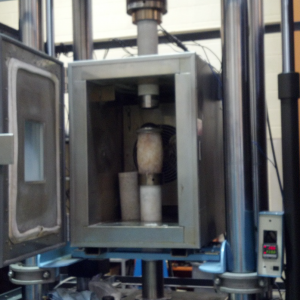