Sandia National Laboratories (Sandia) is tasked with modeling the long-term future behavior of the Waste Isolation Pilot Plant (WIPP). A shortcoming that hinders the accuracy of the analyses is a lack of publicly available shear-strength and deformation properties for geologic contacts and clay seams in bedded salt formations. Consequently, Sandia commissioned RESPEC to obtain representative core samples from a potash mine near WIPP and perform direct shear tests on the geologic contacts and clay seams in those samples. RESPEC collected minimally disturbed, 12-inch-diameter core samples from the rib of a decline in the potash mine.

In the RESPEC Materials Testing Laboratory, the large-diameter samples were cut down and subcored to obtain test specimens that included intact geologic interfaces and clay seams. The tests were performed in a rock direct shear testing machine designed and fabricated by RESPEC. The testing machine includes features that allow for testing of intact weak interfaces as well as conventional rock-joint shear testing. The machine has maximum shear and normal force capacities of 30,000 pounds, which is substantially greater than most rock direct shear testing machines that are designed to test core and lump samples. The force capacities of the machine allowed for applied stresses on the specimens to mimic the in situ stresses at WIPP. The tests were performed following Sandia’s quality control and traceability requirements.

The natural clay seams and geologic contacts recovered from the potash mine had halite crystals intergrown across the contacts, and the shear strengths of the interfaces were on the same order of magnitude as intact salt. Consequently, these strength results are likely an upper bound of the interface shear strength in bedded salt deposits. To establish a lower bound, Sandia extended the project to include fabricating and testing artificial clay seams in salt. Clay seams were fabricated from machined salt cores and brine-saturated bentonite that were consolidated at 2,000 pounds per square inch (psi) for 14 days. After shear testing was complete, the consolidated clay seams showed striations similar to those seen in exposed clay seams in underground salt mines
.
The project established plausible bounds for clay-seam strength and stiffness that will be used by Sandia to improve its calculations of the long-term geomechanical evolution of WIPP. Plans are being developed to core through clay seams at WIPP for additional direct shear testing.

For further information on this project, please see the publicly available reference below. 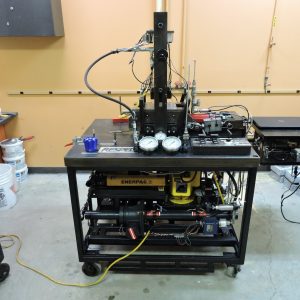 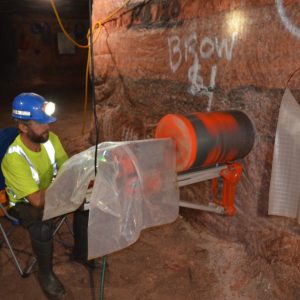