In 2007, the former Homestake gold mine in Lead, South Dakota, was selected as the site of the National Science Foundation (NSF) Deep Underground Science and Engineering Laboratory (DUSEL). The facility is now known as the Sanford Underground Research Facility (SURF) and is primarily funded through the US Department of Energy. During early site investigations for the development of large underground-research cavities at DUSEL, questions were raised regarding the degree of anisotropy inherent in the rock. RESPEC was commissioned to perform an orthotropic anisotropy study on two rock units intersected by the 4850 Level.

The testing program measured the degree of orthotropic anisotropy in strength and elastic constants for amphibolite and rhyolite. Six-inch-diameter field core was recovered from the mine. A coordinate system was established for each borehole, and oriented, 2-inch-diameter test specimens were subcored from the field core. Two types of strain measurements were made. Each specimen was instrumented with four rectangular strain gauge rosettes; a two-axis, diametral extensometer; and an axial extensometer. Uniaxial compressive strength tests were performed on the instrumented subcores in an MTS 315.03 STS stiff testing machine. The tests were performed in constant strain-rate control and the strain gauges, extensometers, and load cell were simultaneously read. The results of the testing program showed that anisotropy in elastic deformation constants was insignificant at the scale of both the strain gauges (approximately 0.25 inch) and the extensometers (approximately 2 inches). Anisotropy in uniaxial strength was also insignificant.

For further information on this project, please see the publicly available reference below. 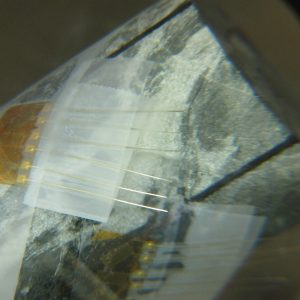 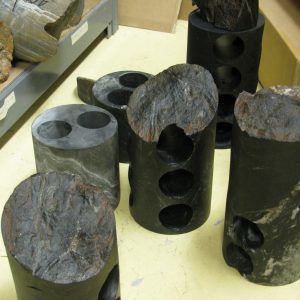