As part of a due-diligence assessment for a confidential private client, RESPEC personnel identified problematic ground conditions on the only decline to access the workings. Insufficient initial engineering in the design and localized roof falls have occurred, and squeezing ground had been experienced in the decline. The proposed remediation plan did not include detailed engineering that was performed to ensure that long-term access could be maintained. RESPEC used existing information (including core logs, underground observations, and mine design) to model the installed ground-control design, which consisted of steel sets, crushable foam fill, and supporting rock bolts. Based on the results of the numerical modeling, RESPEC indicated that the proposed design was suitable for the majority of the geological conditions existing in the decline, but additional rock bolts should be installed in the sections of the decline with the weakest ground. Instrumentation to monitor movement was also recommended. 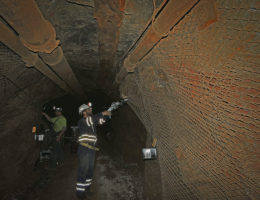