Evaluating the quarrying and processing at the Halawa Quarry.

The Halawa Quarry is located in the Halawa Valley, which is a suburb of Honolulu on the island of Oahu. The 360-acre lease includes two major ridges that are made up of successive lava flows of differing consistency. The deposit contains a dense, hard A-grade material that is interbedded with porous, friable B-grade rock in the same faces. During wet weather, the fines in the deposit create serious material-handling problems.

RESPEC reviewed the mine plan and mobile equipment and then proposed changes to the benching approach and a revised mining fleet, in addition to a long-term mine plan that allowed access to multiple benches. Changes to the processing equipment included upgrading the grizzly screen to accommodate better fines segregation and separating the run of mine fines from crushed fines. 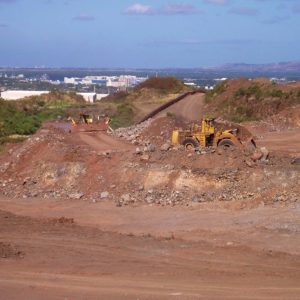