RESPEC was selected to provide geotechnical engineering services for the Alaska State Library, Archives and Museum (SLAM) project in Juneau, Alaska, as a subconsultant to ECI/Hyer Architects. The project sits on approximately 3 acres of land that was originally developed during the early 1900s gold-mining era. The existing Alaska State Museum was demolished to construct the new SLAM building.

The SLAM building has two floor levels with a below-grade level for 62 parking stalls and mechanical space. The first floor is mainly allocated for the museum exhibit and a secure storage area with a loading dock, as well as a lobby and combined service rooms and offices. The second floor has another secure storage area, a library, and several offices. The building has an approximate footprint of 64,000 square feet, and the below-grade parking area covers approximately 53,500 square feet of the total building footprint.

Seven drillhole tests were performed at depths that varied from 20 feet to 75 feet below the ground surface. The test holes were advanced using 8 inch, solid-stem auger boring; wash boring; and rotary drilling to the maximum target depth. Drilling through coarse gravel and cobbles/boulders was advanced by rotary-drilling methods. Tricone and impregnated diamond bits were used to drill through coarse gravel or boulder formations. The rotary-drilling method was performed to crush the coarse gravel or cobbles into small pieces. The coring procedure used a wireline NQ double-tube core barrel that yielded 2¼-inch rock samples to advance through the cobble/boulder formation.

When the ordinary wash-boring or rotary-drilling methods were ineffective at advancing the borehole because of large-particle sizes or the borehole caving in, biodegradable bentonite mud was used to stabilize the borehole sidewalls. Soil samples were obtained at frequent intervals, and representative samples were selected for testing in RESPEC’s in-house laboratory. The collected samples were analyzed for pertinent physical and engineering soil properties relative to the proposed construction. Three standpipe piezometers were installed, and groundwater levels were monitored during the predesign phase because the site was under tidally influenced conditions. 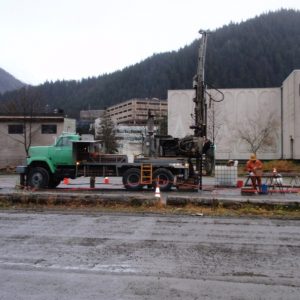 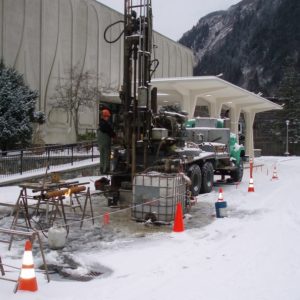